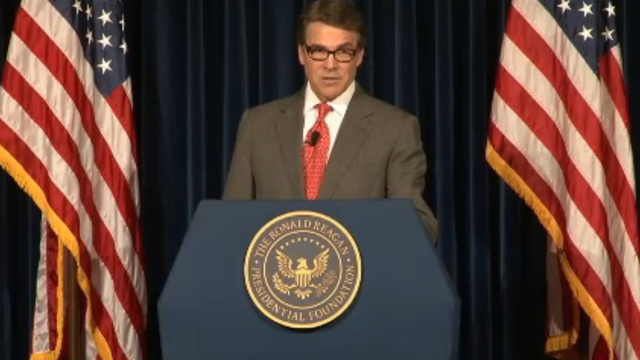 Gov. Rick Perry took his national ambition to California Monday night, bemoaning what he described as a country adrift both at home and abroad and predicting that Americans will demand dramatic change in the next presidential election.

In a speech at the Ronald Reagan Presidential Library, billed as a “major” address by his aides, Perry said voters will be looking for an alternative to “this season of disappointment, mediocrity, decline.”

“I believe that come 2016, if the American people are given the choice, they will be ready for a clean break from the Obama agenda and anything like it,” Perry said.

Perry stopped short of declaring his own interest in a 2016 run — not that he has done anything to discourage the rampant speculation. After the speech, in a brief question and answer session, he acknowledged he wasn't prepared the first time around but said he'd spent the last two years getting ready should he jump in.

During his speech, Perry  conveniently highlighted economic figures in Texas, where a third of the nation’s net new jobs were created since the early 2000's.

“The people of Texas have done it,” Perry said. “In my state, we’ve learned to respect the facts of economic life, including this fact: capital moves ... and capital moves to where it’s welcome.”

To that end, Perry appeared at a welcoming ceremony earlier Monday for Toyota, which is moving its North American headquarters to Plano, a relocation that the governor’s office said will create 4,000 new jobs.

Perry has put the state’s robust job creation front and center in his many travels, fueling more speculation that he will launch another bid for president.

The longest-serving Texas governor has been flirting with another presidential run since the day his last one came to an inglorious end in South Carolina on Jan. 19, 2012. That’s when he pulled out of the first Southern primary, originally intended as a firewall in case things didn’t work out in Iowa and New Hampshire, two days before facing certain defeat

Perry’s address marked the 50th anniversary of a speech Reagan gave on the eve of the 1964 elections. It failed to boost the flagging candidacy of 1964 Republican nominee Barry Goldwater, who was trounced that year by President Lyndon Johnson, but it launched Reagan’s long political career.

The speech at the Reagan library in Simi Valley, California — delivered at the site of Perry’sfirst presidential debate in 2011 — hit on a broad range of topics, from engagement in foreign conflicts to energy policy at home.

Perry repeatedly bashed Obama, saying he had overseen a “hollowing out” of U.S. military forces and blamed him for running an incompetent government.

"In the last year we have have witnessed government bungle health care for our heroes, target our citizens under tax laws, fail to operate a website for the president's signature initiative, trade five terrorists for a soldier who disappeared under questionable circumstances, and leave the front door of the White House open where a crazy man could walk in," Perry said. "That's what we've seen."

In foreign affairs, Perry said Obama has done little to stop Iran make progress toward developing nuclear weapons and has allowed extremists such as the Islamic State in Iraq and Syria, or ISIS, to flourish.

“It is worth pointing out that the rise of ISIS can be directly attributed to the neglect of the president,” Perry said. “We know that the inhumane acts that ISIS ... allowed to occur, have happened because in that hour of decision the president chose a popular political path without concern for the real world consequences.”

The governor also blamed the president for inaction on Keystone Pipeline and other projects that oil companies are eager to see approved.

“Our arsenal of energy can enhance our national security and free our allies from dependence on aggressor states if we have the will to deploy it,” he said. “But here the current president dithers. He seems content to play small ball with a political base instead of hitting a home run for the American people.’’

Perry got hearty applause during the address, but he stumbled a few times on his lines, saying what sounded like Nava-tee instead of naivete, and somewhat bungling his delivery when he faulted Obama for allowing ISIS to spread in the Middle East. 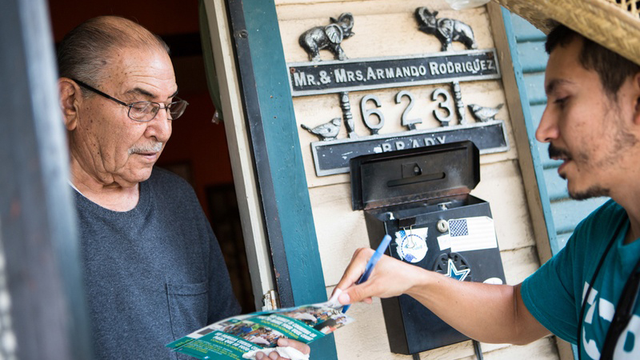 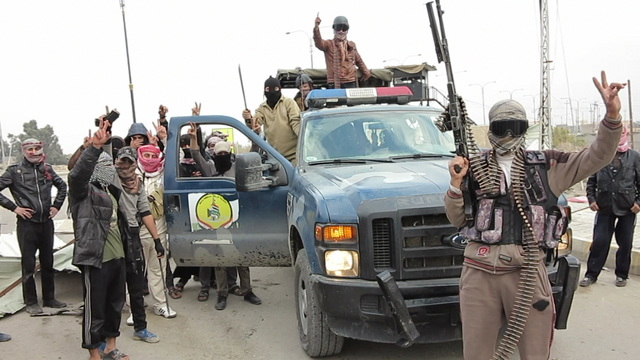