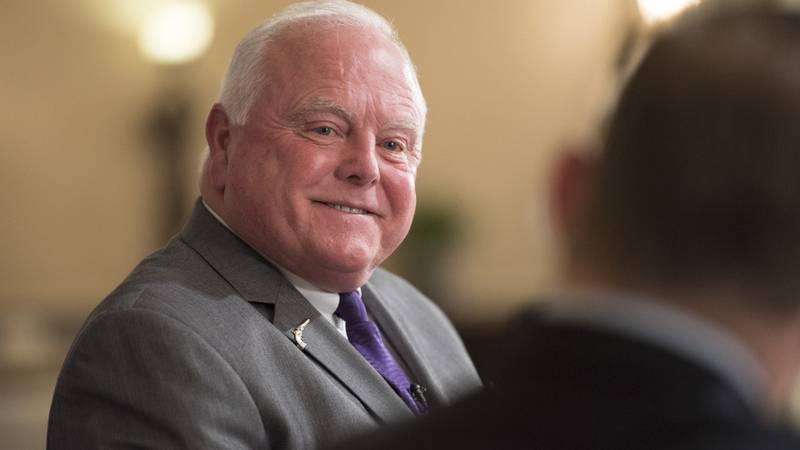 Think of the prayer that accompanied the desperate fling from Northern Iowa’s Paul Jesperson. A “Jesus Shot” sounds like a phrase your irreligious friends would use for his half-court buzzer-beater shot that ended the NCAA basketball tournament for the University of Texas at Austin on Friday night.

Nope. It’s a modern snake-oil remedy that apparently attracted the state’s agriculture commissioner to Oklahoma — a medicinal brew that is supposed to protect patients from all manner of disease and decay.

Too bad it’s not a political remedy. Sid Miller could use one.

Texas agriculture commissioners have historically had a hard time getting any news coverage. It sometimes seems the only way to get any attention at that relatively low rung on the statewide ladder is to foul up. That’s why you’ve probably seen so much of Miller during the past year or so.

His latest headlines topped a read-this-aloud-to-your-friends story in the Houston Chronicle last week that detailed a Miller trip to Oklahoma. Miller expensed the trip — his office later said he would reimburse taxpayers that $1,120 — for a trip across the border. He initially called it a visit to his counterparts in the Oklahoma government, and his office said he had been invited to see them. Lawmakers there told the paper they didn’t invite Miller or even have appointments to see him when he showed up there. And Miller didn’t show up for a meeting with Oklahoma’s agriculture commissioner that he had requested himself.

He did tell one of them, however, that he was in Oklahoma for the wonder cure, and while he wouldn’t confirm that to the Chronicle, he’s quoted as saying this about the shot: “That's private medical information. I'm not going to share that with you. But it's worked out good.”

Hope so. It turned out to be more expensive than he might have expected, financially and politically.

He paid for the shot. He ended up paying for the trip. And he got himself another clip for his scrapbook. It’ll go next to some humdingers, some of them the kinds of things that could hurt him politically, some the sorts of policies that delight his supporters and enrage his opponents.

• He wanted sizable budget increases for the Texas Department of Agriculture. He said consumers were “getting screwed” by businesses the agency did not have the resources to regulate. The Legislature didn’t go for his budget requests, and Miller came back later with a list of fee increases that surprised the ag community and a number of conservatives. It summoned rare pushback from his fellow Republicans, who said he should reconsider and who have promised more scrutiny of his agency’s budget.

• He hired as his assistant commissioner — in charge of legislative relations — a former state representative from Oklahoma who had pleaded guilty to federal charges for breaking campaign finance laws.

• He popped off on Facebook, comparing Syrian refugees to rattlesnakes. Earlier, a spokesman declined to apologize after a member of Miller staff posted to his Facebook page, suggesting the atomic bombing of Nagasaki as a model for making peace with the Muslim world.

• He loudly defended a predecessor’s decision to loosen restrictions on cupcakes and other sugary foods in Texas public schools. Then he rolled back the department’s ban on deep fryers and soda machines in schools. He is sticking to his guns, insisting this month that his agency is ardently fighting childhood obesity and diabetes.

• He added — at no state expense — a “Jesus shot” of his own to the agency, naming an official volunteer chaplain who holds weekly “Faith at Work” sessions for any Agriculture Department employee who wants to take part.

The best thing going for Miller might be that he’s serving in elected office in an uncompetitive political state.

Texas Democrats can make noise if they want to, but they haven’t had anyone elected to the agriculture job since Jim Hightower won in 1986. Within the GOP, the transgressions of statewide officeholders go largely unremarked. Maybe somebody will decide Miller is vulnerable when he’s up for re-election in 2018, but that’s a political eon away. Over the course of his first year in office, few discouraging words have been heard from his fellow Republican officeholders.

If this stuff is bad for the brand, nobody is saying so.