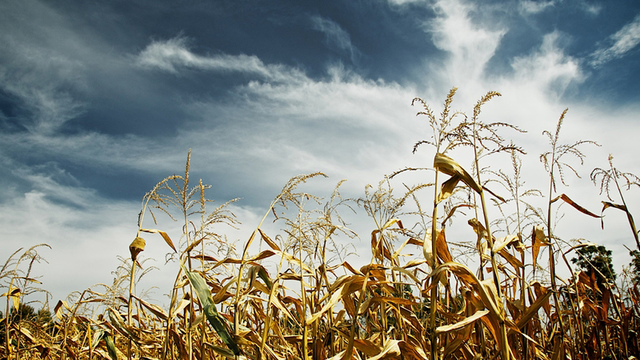 For the state's small and organic farmers, relief from the ongoing drought has not come either from the skies or, until recently, from the state.

But one goal of the Drought Summit, held Thursday in San Antonio, is to change that. The Farm Aid-sponsored event drewhundreds of organic farmers from across the state to take stock of the drought'senduring impacts, and bring a traditionally independent group of growers closer to federal programs that may be able to help them.

“Our farmers don't turn to the government easily; that's not their instinct,” said Judith McGeary, an attorney and the executive director of the Farm and Ranch Freedom Alliance, an organization that supports independent family farmers. “Most of the programs benefit large-scale agribusiness — monoculture, conventional agriculture. So most of the programs are not accessible to our farmers, even if they wanted to take advantage of them.”

“I would go into the Farm Service Agency offices, and their questions don't even make sense to me,” said Robert Hutchins, who owns Rehoboth Ranch, a grass-fed cattle operation in Greenville. “They are working under this one-size-fits-all mentality that is not good for us. To get crop insurance, I would have to sign a document saying I will put chemicals on my property."

The summit also served to familiarize farmers with drought relief options that are available to small and organic farmers, such as coverage for uninsured crops or emergency loans.

“It is overwhelming,” said Diana Padilla, a vegetable farmer from Harlingen. With her husband, Padilla operates Yahweh's All Natural Farm and Garden. “I never considered any of this an option to me before. I am organic and small, and we didn't even think we qualified.”

The drought continues to take its toll on Texas farmers. In 2011 alone, the single-driest year in Texas history, the drought cost the state an estimated $7.6 billion, according to Texas A&M AgriLife Extension Service.

“Drought is much worse than many other natural disasters,” said Scott Marlow, with the Rural Advancement Foundation International. “When hurricanes come in, you see the trucks, you see the windswept reporter on the beach, but when does a drought start? When does it end? It is an isolating experience.”

Recently elected Agriculture Commissioner Sid Miller also spoke at the event, promising to do what he can to keep water flowing to farmers across the state. “In the last 40 years, we have more than doubled our agricultural production while using 40 percent less water,” Miller said. But asked about a state response to the drought, he said there was little he could do. “We don't do subsidies here. There is no appetite for that in the Legislature. There are federal programs that address these needs.”

While the forecast remains dim, with reservoirs 65 percent full and an estimated 60 percent of the state considered to be abnormally dry, Miller's appearance at the Drought Summit sent a positive message to organizers, including the president of the Texas Organic Farmers and Gardeners Association, Susie Marshall.

“The Texas Department of Agriculture has not been so supportive of TOFGA in the past,” she said. “This is optimistic. I think people are realizing that the rural community is still suffering in Texas, and agriculture is the way to get them back.”

Disclosure: The Texas A&M AgriLife Extension Service is a corporate sponsor of The Texas Tribune in 2012. A complete list of Tribune donors and sponsors can be viewed here.