Posted by BY LISA DESJARDINS AND KAMARIA ROBERTS on 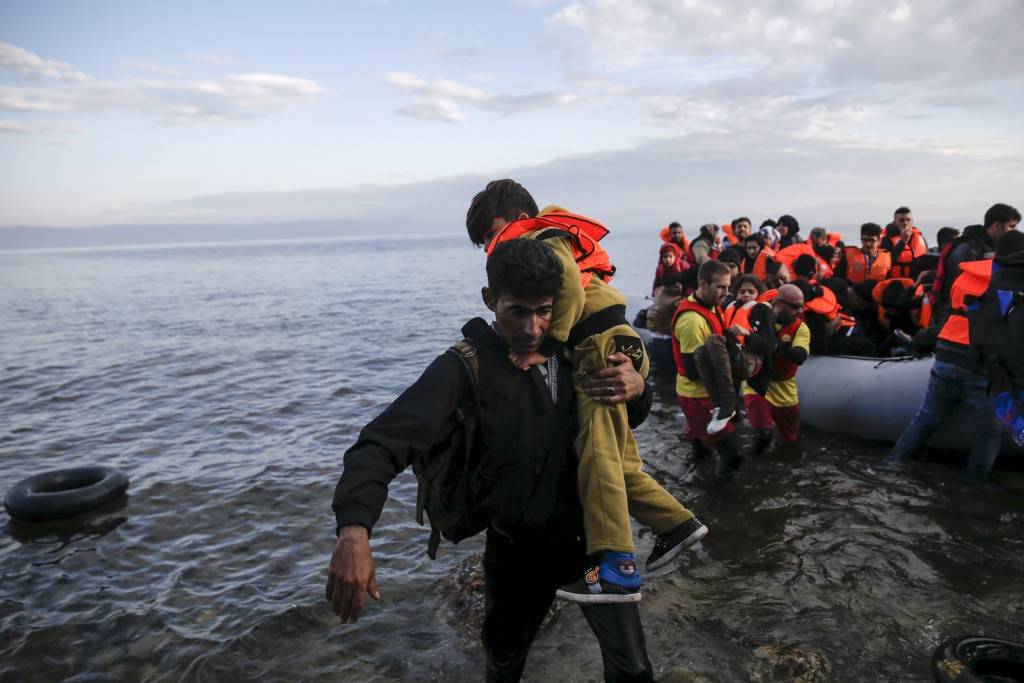 The Paris attacks have generated a range of responses from the men and women who hope to be the next commander in chief of the United States. Here is NewsHour’s look at the candidates’ takes and their possible presidential approaches.

Declare war. Move against the Islamic State with our allies. Allow U.S. entry for Christian refugees, scrutinize others.

Bush spoke on Meet the Press Sunday morning, criticizing both President Obama and two of his GOP rivals. ““This is viewed as a law enforcement exercise by the Obama administration,” he said. “We should declare war.” When asked by moderator Chuck Todd if he would trust frontrunners Ben Carson or Donald Trump as commander in chief, he replied, “I don’t know. The words that I hear them speaking give me some concern.” Monday on CBS This Morning, Bush said that the U.S. should work to help Christian refugees but increase scrutiny for others.

The Republican frontrunner told a group of party activists Friday that the U.S. should at least temporarily block entry for Middle East refugees. Carson told FOX News Sunday, “We should use our expertise and resources to help get them resettled over there, and to support them over there, but to bring them here under these circumstances is a suspension of intellect.”

New Jersey officials on alert. The U.S. must increase action against the Islamic State.

Hours after the attacks, the Garden State governor wrote that he was working with federal and state agencies to ensure security in his state. The following day at the Sunshine Summit in Orlando, Florida, Christie criticized the Obama administrationsaying, President Obama “likes to see (the world), as a fantasy. I see the world as it really is, and it’s time to have a president who sees the world as it really is, not how he wishes it would be.”

In a Saturday rally at the conservative Christian Bob Jones University in South Carolina, Cruz told voters that Muslims from Syria should not be allowed into the United States now, but that the White House should allow entry to in Christians fleeing persecution. On Sunday, the Texas senator pushed back against Democrats, in particular Hillary Clinton, who avoided using the phrase “radical Islam.”

In a video posted to her Twitter account, Fiorina said that as president she would provide Middle Eastern allies with more weapons and training to fight the Islamic State. Speaking at the Sunshine Summit in Florida on Saturday, Fiorina blamed President Obama and his administration’s foreign policy decisions for the Paris terrorist attacks.

Step up action against the Islamic State.

Gilmore released a statement on Friday evening, criticizing President Obama and pushing for a more hawkish policy. “This enemy does not respect or fear weakness, and we have given them more than enough of that these last seven 7 years,” the former Virginia governor wrote. “This will only end when we exact justice on this enemy. And by justice, I mean kill them. They will not wait to kill us.“

France should invoke NATO charter, call allies to go to war. The U.S. should send ground troops to fight the Islamic State.

Speaking on CNN Sunday, the South Carolina senator told CNN that France should invoke Article 5 of the NATO treaty, which requires members of NATO to come to one another’s defense. Graham warned another “9/11 is coming,” and the U.S. must send troops to the Middle East to combat the Islamic State.

The day after the attacks, Mike Huckabee tweeted that he would partially shut U.S. borders, closing them to anyone arriving from nations where the Islamic State operates.

The former Arkansas governor also wrote that he would step up attacks on the Islamic State with a multinational coalition. Nations not participating would be sanctioned under Huckabee’s plan.

Jindal took to Twitter to announce his stance as governor Monday.

At Florida’s Sunshine Summit earlier in the weekend, Jindal pivoted to talk of immigration in the U.S. saying America must seal its borders.

Invoke NATO Treaty Article 5 and go to war against the Islamic State to defend France.

In a campaign statement, Kasich wrote that the U.S. should invoke Article 5 of the NATO Treaty, which requires nations to come to one another’s defense, and step up military action against the Islamic State. He wrote that he would summon European, Turkish and Sunni Arab allies to work with the U.S. to try and defeat ISIS.

Block Syrian refugees. Move against the Islamic State with our allies.

In a statement released on his website the night of the Paris attacks, Pataki wrote, “ISIS, al Qaeda and their branches are recruiting, planning and plotting to kill us here – we must kill them there. We must put an immediate halt to granting asylum to Syrian refugees.”

Temporarily block refugees from Islamic State-controlled territory. Impose 30-day wait for approval for most travelers to the U.S.

The Kentucky senator has introduced a bill to block visa insurance, thereby temporarily blocking most entry, for countries with a high risk of terrorism. The plan would also impose a 30-day waiting period for all entries unless the person has been approved through the Department of Homeland Security’s Global Entry program. At the Sunshine Summit in Florida on Saturday, Paul criticized opponent Marco Rubio(below) for opposing similar legislation in the past. In an interview with Fox NewsSaturday, Paul said he continues to believe the national debt is still the most significant threat to national security.

Rubio opposes allowing more refugees from Syria into the United States now. In astatement released on his website, the Florida senator wrote that it is impossible to determine which refugees may have violent motives. He wrote, “There is no background check system in the world that allows us to find that out, because who do you call in Syria to background check them?” In a video released Saturday, Rubio said the Islamic State is fighting with Western civilization and Western values. On Sunday, Rubio told ABC’s “This Week” that the U.S. should invoke NATO Treaty Article 5 and form a coalition for war.

Santorum has long called for sending some 10,000 American troops to the region to help battle the Islamic State. He stressed his hawkish view on Twitter the day after the attacks.

Santorum wants to limit all legal immigration to the United States and told Breitbart News on Monday that Syrian refugees should be barred from entering and that he is suspicious of the proportion of men arriving as refugees.

In a Monday phone interview with CNBC, Trump said that the U.S. must block Syrian refugees from entering the country. The real estate CEO believes that coalition forces should target terrorist banking abilities and oil resources, which they use to generate funding. In a speech in Texas on Saturday, Trump said that increased gun ownership would have helped prevent deaths during the Paris attacks.

Allow 65,000 Syrian refugees into the country after thorough screening. Islamic State cannot be contained; it must be defeated.

At the Democratic debate on Saturday, the former secretary of state said she continues to support allowing 65,000 Syrian refugees into the United States, as long as they go through a careful screening process. On how to fight the Islamic State,Clinton said the terrorist group “cannot be contained” and must be “defeated.” That was in contrast to a statement by President Obama one day before the attack, concluding that the terrorist group had been “contained.” At the debate, Clinton said the attacks were committed by a “barbaric, ruthless, violent, jihadist terrorist group.”

Allow 65,000 Syrian refugees into the country after thorough screening. Move against the Islamic State with allies. Step up assessment of threats.

At the debate Saturday, O’Malley stood by his past support of allowing 65,000 Syrian refugees into the country once they’ve been screened thoroughly. In an interview with MSNBC, when asked if he thought President Obama underestimated the Islamic State, O’Malley stated, “I believe…we have not yet developed a farseeing national security strategy that identifies threats before they arise to a position that they become military problems for us.”

Do not ban Syrian refugees. Move against Islamic State with a coalition, potentially including Russia and Iran.

In a speech on Monday in Cleveland, Sanders stressed his opposition to any ban on Syrian refugees coming to the United States and accused those calling for such bans of fomenting “Islamaphobia.” He told a crowd Sunday in Indianola, Iowa, that he is open to working with Iran and Russia to fight the Islamic State. One day earlier, at the Democratic debate, Sanders argued that climate change aids the Islamic State and al-Qaida in their recruiting by cutting resources and opportunity. The Vermont senator said climate change remains the most significant threat to national security.